Lisbon is the capital of Portugal and lies on the north bank of the Tagus Estuary, on the European Atlantic coast. It is the westernmost city in Continental Europe.

Greater Lisbon has an area of approximately 1,000 km2. The city lies more or less in the centre of the country, approximately 300 km from the Algarve in the south and 400 km from the northern border with Spain. Lisbon offers a wide variety of options to the visitor, including beaches, countryside, mountains and areas of historical interest only a few kilometers away from the city centre.

Due to the influence of the Atlantic Ocean, Lisbon has a pleasant climate throughout the year. The agreeable  temperatures in the summer months are an open invitation for a walk by the river, or to spend an afternoon in one of the many street cafés to be found all over the city.

Lisbon is considered a very safe city but you should take normal,  sensible precautions to avoid mugging, bag snatching and pick pocketing. You should be extra vigilant at airports and railway stations. Do not leave valuables unattended. Most shops and all major taxi companies accept credit and debit cards, so there is no need to carry a lot of cash.

The local currency is the Euro (€). All major credit cards are accepted widely, but not everywhere. If in doublt, ask in advance. Cash-on-card services are available from selected American Express, Diners Club, MasterCard or VisaCard addresses. These cards are also accepted by all GWK currency exchange outlets anc Change Express Offices.

Voltage: 220volts with 2 pins wall sockets at a frequency of 50 Hertz. All sockets follow European standards. To use American-type plugs, a 220-volt transformer should be used together with an adapter plug.

For Police and Ambulance emergency dial 112.

With the exception of vaccination certificates for persons coming from areas where yellow fever is endemic, at the present there are no special health requirements.

Portuguese is Latin in origin and the third most widely spoken European language in the world. It is the mother tongue of about 200 million people.
Portuguese is the official language in several countries: Angola, Cape Verde, Guinea-Bissau, Mozambique, São Tomé e Príncipe in Africa, and Brazil in South America.

Value added tax (VAT) is included in prices quoted. For non E.U. residents, tax free shopping schemes are available in many shops, which give substantial savings to visitors.

The Portuguese law, in accordance with Regulations in force in the majority of European Countries and the USA, does not allow smoking in any public transportation or in any closed public areas. (Some restaurants, bars and discotheques can designate 30 percent of their space for smokers if they are larger than 100 square meters). Non-compliance with this ban can lead to prosecution and a fine of up to 1.000,00 Euros.

Tipping is optional, but adding 10% to the amount is regular practice in taxis, restaurants and bars. 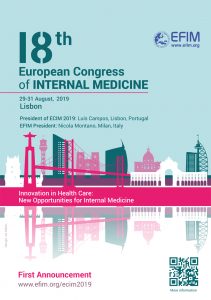 Feedback Form – EACCME® (mandatory to get your certificate for credits)